A button on Tessel's GPIO bank

A button on Tessel's GPIO bank 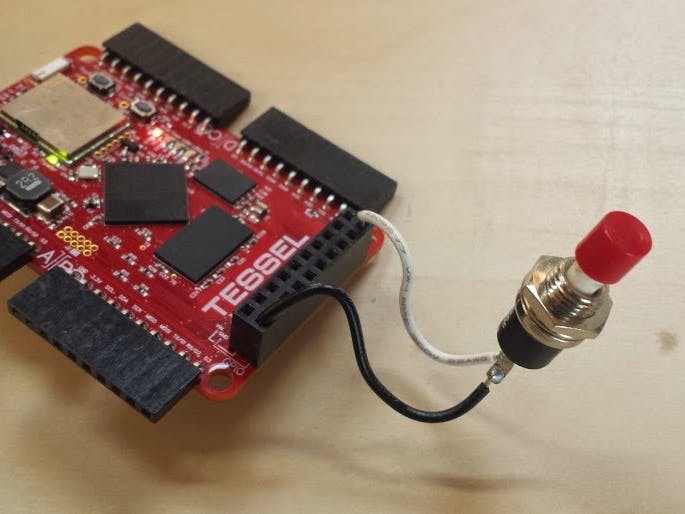 A button on Tessel's GPIO bank.

Your button should have two wires sticking out of it. Plug in one side to ground, and the other to pin G3.

Congratulations, you now have a button!

How it works, and why

Why add a button over the GPIO?

Buttons are a nice, easy way to make your project interactive. Tessel comes with API access to the Config button on the board. For many use cases, this is enough. But perhaps you want more buttons, or buttons with a certain look or feel. That's where this tutorial will come in handy.

Making a button talk to Tessel

Tessel has six digital pins along the GPIO bank, marked G1-G6. Each of these pins is pulled high (3.3V) by default. In order to change the state of these pins from high to low, all you have to do is connect a digital pin to ground (GND).

If you have a wire, you can try it out– plug in a wire (ideally black, for ground) in to the GND pin on Tessel's GPIO bank. While running the code below, try sticking the other end of the wire into G3:

Okay, now let's try it with a button. It's basically the same thing. Unplug your Tessel (it's bad practice to mess around with wires while your Tessel is powered). Your button should have two wires sticking out of it. One of them should plug into GND; the other into pin G3.

Tessel has events for its pins. It fires an event each for rise, fall, and change.

If you have a really nice button, this might just work. However, if you have a cheap button like mine, the fall event will be emitted more than once per button press. This is because you are dealing with a mechanical system, and the electrical contact is actually bouncing a little bit on contact and messing up the signal. You can read about this phenomenon here.

In order to correct this problem, we need to do some software debouncing.

Debouncing can be a very complicated problem if you need the ability to read the button several times a second (read a few approaches here). However, for most applications, you can simply reduce the rate at which your events can fire.

Let's try adding a delay timer to the event:

500ms worked well for my button, but feel free to adjust the delay and see how long it takes for your button to stop bouncing.

For the sake of consistency, I've set up index.js of this folder the same way we set up every module, to emit an event on press. press and release are individually easy, but harder to have both due to our simple debouncing method.

I've done something rather interesting to get around this in index.js; feel free to check it out (and PRs welcome if you can think of a better way).

Say you want more than one button. Maybe you're making a game controller, or a musical instrument or something. So you have several buttons to connect.

All you have to do is connect one side of each to ground, and the other side to a different digital pin.

Then make different instances for each button. Like this:

Pressing the different buttons will give you different messages.

Note that I used a breadboard to connect several buttons to the same ground. If you're interested/want to know more about breadboards, this is a really good place to start.