JavaScript Driver for the TB6612 motor driver from Sparkfun

How to Drive Motors on Tessel

How to Drive Motors on Tessel

JavaScript Driver for the TB6612 motor driver from Sparkfun 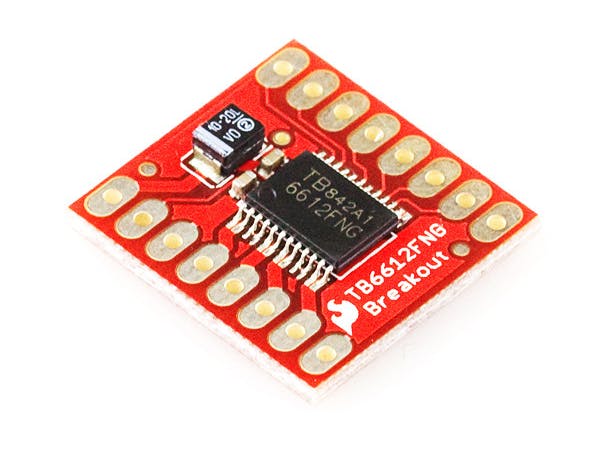 A JavaScript Driver for the TB6612FNG motor driver from Sparkfun. Use this chip to drive one or two motors from your microcontroller.

If you're looking for a fun project, I recommend integrating this motor driver with this motor powered car kit.

The hardware hook up for this module is a little more complicated than usual because it needs to use 5 different GPIOs and 2 PWM pins. Tessel's GPIO bank offers 3 PWM (which can also act as GPIO) and 3 GPIO pins so you'll need to add one more GPIO from another module.

I followed the wiring tutorial I found on this instructable.

Note: You should probably use throughhole diodes (as explained in the Instructable I posted above) on between the motor driver output and the motor. This protects the chip from back EMF.

library.use(gpioPort, otherGPIOPin, callback) initializes the module and returns a MotorDriver object. The GPIO bank must be the first argument and any other GPIO pin can be the second callback. The extra GPIO pin must be

MotorDriver.drive(motorIndex, direction, speed) turns the motor at motorIndex (either 0 or 1) in direction (0 for forward, 1 for backward), at rate speed where speed is a float between 0 and 1.

ready thrown after the module initializes.

drive thrown when a motor is being driven. Arguments are (motorIndex, direction, speed).

In the /examples directory, there are two main examples: