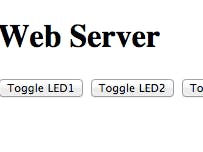 This is a demonstration of using both a routing library (tiny-router) to field HTTP requests as well as a websocket connection (using nodejs-websocket) to a client. This is useful when you want to display an interface to a client and have that client manipulate the state of Tessel.

When a client goes to the IP Address of the Tessel, the Tessel will serve the static html file. When the client receives the HTML file, it will run the included JavaScript which opens up a websocket connection back to Tessel.

The HTML provided buttons for toggling the LEDs and the websocket will toggle led0 every five seconds by default.

Connect your tessel to wifi:

Your Tessel will print its IP address to the console. If you didn't see it, run:

What you can do

If you click any of the buttons in the loaded website, Tessel's LEDs will toggle. Additionally, the websocket will automatically toggle led0 every five seconds.

I've noticed that using both websockets and HTTP on Tessel makes it less reliable. I usually have to reset it after each successful push in order to receive another HTTP request. We're working on it!